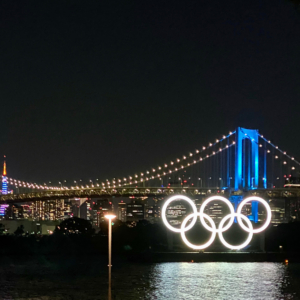 As parts of the world continue re-opening after their battles with COVID-19, the opening ceremonies for the Tokyo Olympics will be held on July 23rd. In the aftermath of the Great Tohoku Earthquake of 2011, they were originally planned as the “reconstruction Olympics” to show the region’s recovery. Of course, COVID-19 forced their postponement to 2021 and also re-framed their meaning in the context of humanity’s struggle with the pandemic. Unfortunately, continuing surges in many parts of the world as well as Japan’s own slow vaccination roll-out means that a “mission accomplished” declaration is not yet in sight. Furthermore, the barring of spectators from the stands and the cancellation of Olympic related public events have left many in Japan wondering what the legacy of these games will be.

One of the intended legacies that will actually be realized is the high-profile promotion of wood use in the Olympic facilities. The new USD$1.4 billion 68,000 seat national stadium was designed by the wood loving, Japanese rock-star architect Kengo Kuma. Approximately 2,000m3 of wood was sourced from all 47 of Japan’s prefectures to be used in the stadium’s roof assembly and interior. However, it was not just the centrepiece of the Olympics that received the wood treatment. There are many others including the Ariake Gymnastic Centre used 2,200m2 to create what is said to be one of the largest wood roof structures in the world, while the expansive Village Plaza in the athlete’s village was constructed with traditional Japanese construction methods using domestic larch, cedar, and cypress.

While it was natural for the country to prioritize the use of domestic species in this showcase, BC Wood members can take pride in the fact that a number of their Japanese customers ranging from distributors, pre-cutters, treaters, etc were the ones behind these fabulous structures. In addition, the project leader from the mega-general contractor who built the Olympic Stadium twice took part in BC Wood’s GBM™ extended missions and WoodTALKS™ programs to learn about mass timber. The Richmond Oval built for the 2010 Vancouver Olympics was truly one of their main inspirations and it was an honour for me to take him and his team on tours of it.

The Japanese Government has long followed BC’s “Wood First” initiative and that undoubtedly was a factor behind their desire to use these Games to overcome long held misconceptions about using wood in large scale buildings. While thousands of spectators will not be sharing images of these modern-day wooden temples on Facebook and Instagram as had been planned, these Olympics are expected to have the highest television ratings in history meaning that people in Japan and around the world will be delighted by these structures from the safety of their own homes. The Japanese wood construction industry could not ask for a bigger promotional campaign and that will benefit all suppliers of wood products to the Japanese market.

The other positive aspect of these unique Olympics will be that for the first time in a very long time the athletes will truly be the focus. Let’s all hope that they can have a safe opportunity to perform at their best. And of course, Go Canada Go!