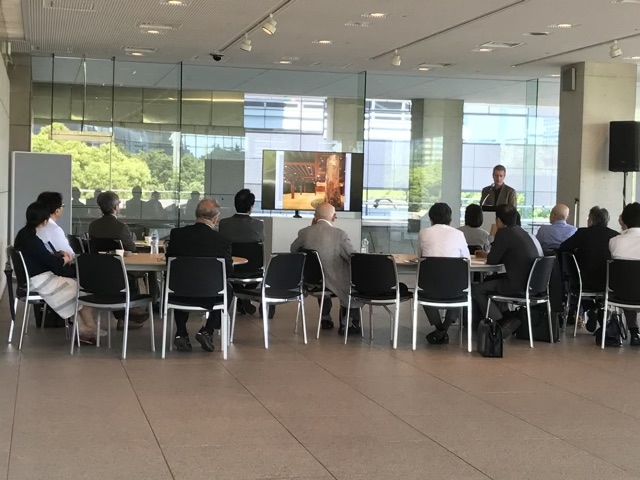 During the months of May and June, BC Wood does not participate in any trade shows in the Asian markets, but this does not mean it is a quiet stretch. In fact, it is a very busy time of the year as we are out visiting many clients to talk about the GBM.

In Japan, it is also the “Sokai (AGM) season” when every association holds their annual general meetings. These typically start in mid-May after the Golden Week holiday and the last ones wrap-up around mid-June. This year I attended six of these events across Japan, with most of the associations agreeing to distribute our GBM information. We also organized GBM information sessions in Sapporo, Nagoya, Osaka, and Fukuoka earlier on the same day as these AGMs, so that other local contacts from our client database could come and find out more about the Whistler show and the preceding Extended Missions. Our largest information session was in Tokyo and graciously hosted by the Canadian Embassy. This event has become our annual kickoff event for the GBM in Japan, with many industry media representatives also attending.

Speaking to many people at these various events, several common themes emerged. As BC’s current forest industry challenges are known in Japan, many importers and users of Canadian lumber products asked questions about supply going forward. They were interested to know if the enactment of the CPTPP between Japan and Canada, as well as Canada’s ongoing trade friction with the US and China, would lead to Canadian companies becoming more active in Japan. The other common theme was the interest in wood usage in commercial/non-residential projects. Many Japanese companies that have traditionally serviced the single-family housing market see non-res as their opportunity for growth domestically. What they see happening in North America with mass timber is exciting and they want to learn from Canada about related business opportunities, both on the structural and millwork sides. I expect that many of our GBM participants from Japan this year will be coming with these kinds of questions in mind.