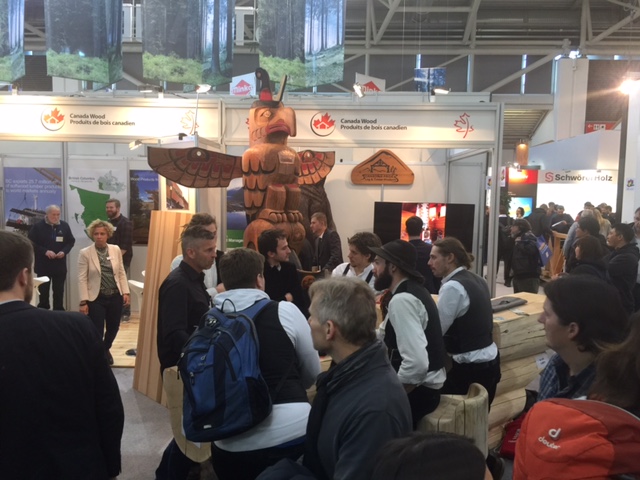 BAU is the largest and best known building products show in the European market. The BAU fair, held every two years, attracts over 270,000 attendees. Some 55,000 of these attendees come from neighboring Western European countries and the ex-Soviet Bloc countries. A unique feature of the BAU show is that it consolidates companies featuring wood products and wood building systems in one of its sixteen halls. So while the show is very large, the majority of potential customers for wood based products and building systems are concentrated in one display hall.
Throughout Western Europe and particularly in resort regions that have a high percentage of second luxury homes (such as the Alps in France, Germany, Italy and the Pyrenees region of Spain and France), there exists good potential for manufacturers of log and timber frame homes. The BC handcrafted style, featuring large diameter logs and heavy timbers, have a unique appeal to these wealthy homeowners.
High quality finished building materials such as decking, siding, roofing, flooring and millwork are all in demand. Specialty lumber such as Douglas-Fir, Hemlock, and a range of hardwoods are also highly sought after by manufacturers in the emerging markets of the post-Soviet bloc countries.
In January 2019, BC Wood plans to organize a large display at the BAU fair for member companies and other Canadian forest products associations. While the show is not for another ten months, its’ high-profile means that the show sells out quickly and our organizational efforts need to start now. Space is limited, so, for more information regarding the BAU show, BC Wood’s participation, and costs, please contact Brian Hawrysh at 604-882-7100, or directly at bhawrysh@bcwood.com.
Subscribe to Newsletter
Kit Crowe2020-04-09T02:35:29-07:00