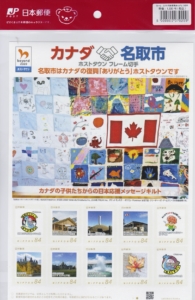 Japan Post has released a stamp series to commemorate Canada’s support in the aftermath of the 2011 Great Eastern Japan Earthquake. This collection focuses on the special friendship that has been established with the heavily damaged city of Natori where the first two Canadian reconstruction projects were built: the Donguri-Anne Library and the Yuriage Market. To show its appreciation for Canada’s aid, Natori City has held many special events and also became the host town for Canadian athletes who will be competing in the Tokyo Olympics next year. In addition to support from multiple levels of government and numerous industry associations, many BC Wood members also contributed time and materials to these projects and it is wonderful to see the tremendous goodwill that these efforts have created for Canada in Japan.